#747: Hello again folks! I nearly inserted this scripture in my previous article about the plight of Iraqi Christians. But it feels right to quote it as a stand alone statement by the LORD Jesus Christ because it is timeless Truth:

"And ye shall be hated of all men for my Name's sake: but he that endureth to the end shall be saved."
[Matthew 10:22] 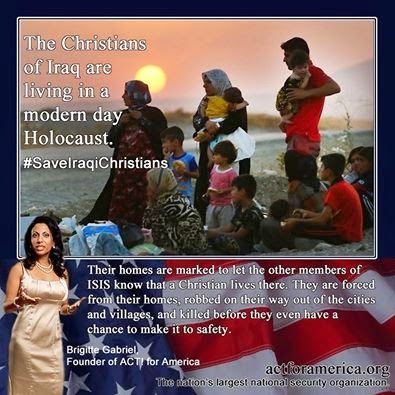 #746: Hello again folks! I understand why the media prefer to report on the Commonwealth Games, the downing of flight #MH17 and even the situation in Gaza [biased against Israel, of course]. The massacres in Syria are now largely unreported. Yet, repeatedly, the murder of Christians by followers of the so-called 'religion of peace' in Sudan, Afghanistan, Egypt, Iran, Nigeria and multiple other places is rarely if ever mentioned.

Now, in Iraq, Christians are being purged from the north by the utterly detestable ISIS - an organisation of true muslims following their 'peaceful' religion to the letter. The dissolution of Iraq was reported at first, yet, like Syria, it is slipping away from the headlines in favour of more attention grabbing 'news'.

We see thousands of muslims and infidels protesting about Gaza. Some of those 'protesters' in Paris have looted and attacked Jews and their businesses to make their point, apparently. So why do we not see them protesting about ISIS or about the wholesale murder of believers of the Book in Iraq? The hated West is most certainly no longer 'Christian' thanks to decades of decline so everyone is rounding on a new enemy. Jews, Bible believing Christians and even Churchians or anyone who challenges evolutionary theorem or crazy, politically correct edicts are the new foes. They are the haters who are hated.

Meanwhile Christian men, women and, yes, children are being murdered by koran and hadith believing muslims in Iraq. Very few outside what was once Iraq know about it. The world is ignorant due to apathy and/or ignorance. Its attention is on other international, national and local matters. You're labelled an islamophobic if you make comment. All to appease in a Chamberlainesque kinda way. If you do nothing else today, think on those brave Iraqis being murdered for their faith. Don't be surprised. The LORD Jesus Christ said that this would happen to those who follow Him. But please remember the Hidden Holocaust.

#745: Hello again folks! You dare not take the Book of Genesis as literal unless it tells you not to do so. Before the worldwide flood of Noah, the Book of Beginnings tells us this about the society of those dark days:

The scripture stats that "... the earth was filled with violence." When these inspired words came to mind, it made me think of the appalling violence taking place not only in Gaza but also in Syria, Iraq, Afghanistan, Sudan, Egypt, sub-Saharan Africa and in many other places - specifically where islam is seen to be on the march. Bible prophecy is midrashic in places and there is often a repetition of cyclical prophetic fulfilment leading up to the ultimate and final fulfilment. An example of this is all the types of antichrists that there have been and will be up to and including the final one.

The violence and intimidation we see in the islamic world seems to be as utterly awful as that which the LORD saw before the Flood and His Righteous judgement unfolded. I wonder if the violence of an islam dominated last days world will mirror that of the antediluvian world? We can already see how much wickedness is afoot in those areas. There really is nothing new under the sun. 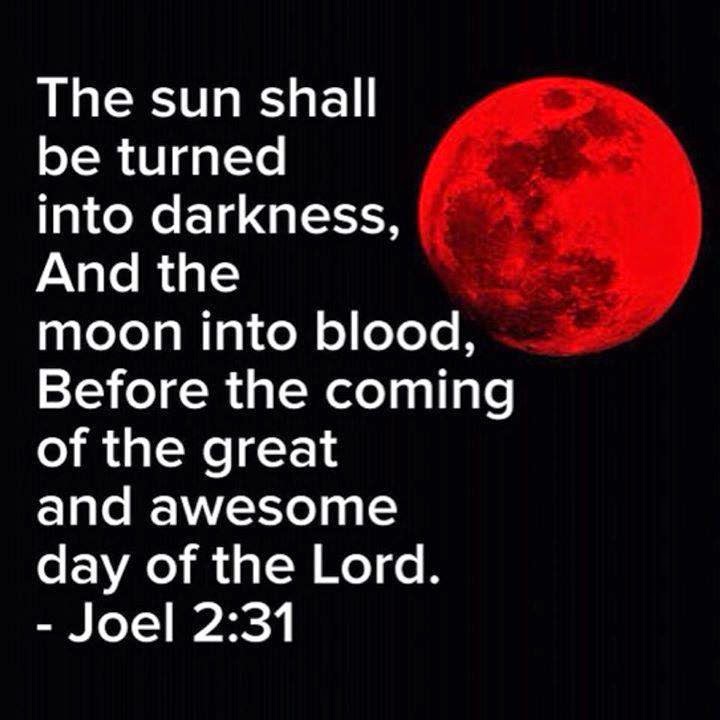 #744: Hello again folks! I agree a whole lot with Joel Richardson and his belief that the facets of coming antichrist line up almost perfectly with that of the predicted return of the islamic mahdi. I'm also a convert to the midrashic methodology of interpreting Biblical prophecy.

Now Joel 2:31 is a key eschatological scripture, and we know that God is a Spirit and those who worship Him must do so in Spirit and in Truth. I confess that I am the world's worst Christian but something like this came into my mind this week when considering the above scripture:

What if there is a physical AND spiritual outworking of this prophecy in the days to come? It occurred to me that the long prophesied beheading of believers in the Book of Revelation aligns with the 'fruit' of islamic conquest and/or submission to thereof. With the crescent moon symbol adorning every mosque, it crossed my mind as to whether that blood red moon could be also read as a blood red crescent.

Could this be a coded warning to us now? Could the perpetrators of the ultimate Holocaust in the last days originate from that very crescent? Could Joel 2:31 also refer to the same blood soaked red crescent as well as a major cosmic event? A darkened Sun could also represent the absolute spiritual darkness of receiving the 'Mark of the Beast' and therefore being damned forever.

It could be my folly or it could be of God. I hope my musings are the latter.

The Alliance of Islam and Naziism

#743: Hello again folks! The above photograph shows clearly the relationship between the ideologies and indeed religions of islam and naziism. Their united goals of the destruction of  the Jewish people made them and continue to make them natural bedfellows. The texts of 'Mein Kampf', the koran and the hadith are united in that very goal. Indeed, this hadith clearly states the following:

"I heard Allah's Apostle [Muhammad]saying, "The Jews will fight with you, and you will be given victory over them so that a stone will say, 'O Muslim! There is a Jew behind me; kill him!'"
[Narrated 'Abdullah bin 'Umar: Sahih al-Bukhari, Volume 4, Book 56, Number 791]

True [or as the media term it: 'radical' or 'fundamentalist'] islam teaches this tenet. The rising tide of anti-semitism across Europe and, indeed, the world should be sounding the alarm bells.

"Those who fail to learn the lessons of history are doomed to repeat them."

#742: Hello again folks! The parable of the talents is ageless, well-known and oft preached. But something occurred to me this last week. And that is that the LORD Jesus Christ is not so much interested in what we have done, for we are all sinners of a kind each with our own weaknesses, but that He will also righteously judge what we did NOT do.

#741: Hello again folks! At a time when the teaching of biblical Creation - and by extension the historical and scientific account of Genesis - is being outlawed by our so-called government, here's what the LORD Jesus Christ actually said about an actual 'Noadhic' flood:

"But as the days of Noah were, so shall also the coming of the Son of man be. For as in the days that were before the flood they were eating and drinking, marrying and giving in marriage, until the day that Noe entered into the ark ..."
[Matthew 24:37-38﻿]

"They did eat, they drank, they married wives, they were given in marriage, until the day that Noah entered into the ark, and the flood came, and destroyed them all."
[Luke 17:27]

#740: Hello again folks! Not that I'm being 'controversial' ... but here's what the LORD Jesus Christ actually said about the not-so-thorny issue of marriage:

"Therefore shall a man leave his father and his mother, and shall cleave unto his wife: and they shall be one flesh."
[Foundation: Genesis 2:24]

"And he answered and said unto them, Have ye not read, that he which made them at the beginning made them male and female, And said, For this cause shall a man leave father and mother, and shall cleave to his wife: and they twain shall be one flesh?"
[Affirmation: Matthew 19:4-5]

#739: Hello again folks! I've heard many people, Churchians, religious 'experts' and even some Christians say that the LORD Jesus Christ never actually said that He was God. I beg to differ: